Going Mobile – Tips for Writing from Anywhere, Any Time 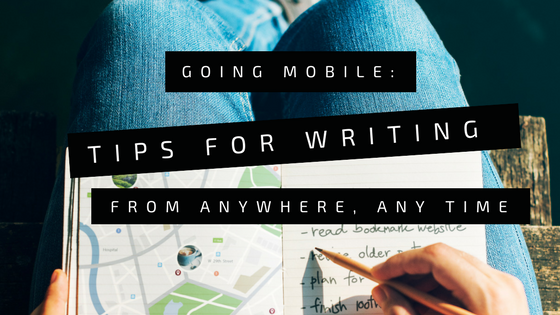 For the past four days, my internet service provider (who shall remain unnamed) has had a major outage. It’s impacting a large portion of the country, I’m told, and there’s no word on when it will be restored. And, by sheer coincidence, my laptop and phone have lost the ability to communicate with each other, which means even tethering is out for the moment. I’m writing this post on my iPad.

This is cool. No problem. Nothing to get steamed over. It’s not like Ihaven’t written from my iPad in the past—I’ve written entire books on this thing. In fact, writing from mobile platforms is kind of becoming my thing, these days, and for a lot of reasons.

So for that, and for the fact that I’m being forced to go mobile anyway, this week’s post takes a look at going mobile with your writing, with a few tips, tricks, and best practices to help you get the most out of writing anywhere, any time.

Time to rethink writing and publishing

Everyone has their preferred writing tools. I’m constantly astounded by the number of authors I meet who still write all their books longhand. But there are even those who rely on “antiquated technology.” A lot of writers I know personally are enamored with the NEO AlphaSmart, for example, which is functionally a USB keyboard with a large buffer—you write your pages, from wherever you happen to be, then plug the AlphaSmart into your computer and it “types” your book into the writing program of your choosing, a character at a time.

That might sound insane to some, until you learn that George R.R. Martin still uses Wordstar 4.0—a DOS-based writing application that is just about as basic as a word processor can get.

If we’re talking more modern fare, Steven Gould, author of “Jumper,” writes using iA Writer—an iPad app that has a very toned-down focus mode that covers just the basics. You can still do this stuff with modern technology, in other words.

Talk to any 100 authors, and you may well get 100 different ways that books can be written, edited, and published. And that, friends, is fantastic.

What it shows is that our definition of “writing” is personal. It’s a process that isn’t defined for us, through some prescribed and stone-writ method, but is instead a fluid and evolving system by which we can tell and share stories, to inform and inspire and entertain.

This fluidity is exactly why we must sometimes rethink what it means to write and to publish. Changes in technology often open up new paths for doing this work, and that means we can gain a new perspective and achieve new growth in our careers.

The most recent advancements have been on the mobile front, and they’re eye opening. Smart phones and smart tablets have made it possible for anyone, anywhere, to not only be connected and to have access to a virtual Alexandria of information at their fingertips, but also to express themselves and to reach audiences around the world, regardless of the writer’s financial status or even even their level of education.

In a talk given at the 2016 Smarter Artist Summit, in Austin, Texas, thriller author and podcast host Joanna Penn gave a presentation that was meant to create awareness among authors, to aim them at new and emerging markets worldwide. “Through mobile phones, new markets in regions of Africa, India, and Brazil are opening up, and readers are looking for new work to discover.”

As authors, we really need to consider this. For the first time in history, some of the poorest regions on the planet now have access to the same information and resources as the wealthiest people in the world. They have access to books, websites, videos, and more—all of which were inaccessible to them, even just ten years ago.

This is creating a boon in education and growth, and of course it has also opened opportunities for authors to reach a thriving and eager new market of readers.

But it means something more, for the will-be author.

In their TED Talk, “The Power of Mobile in Africa,” Julian Pistons and David Steinacker observed that “… many users in Brazil, or South Africa, or Tanzania [are] skipping the PC stage, and skipping the laptop stage, and they are going straight to mobile.” Through new resources, such as micro financing and digital currencies (Bitcoin is one example) these regions are experiencing an explosion in entrepreneurial growth. And with that, some of them have started producing content of their own.

If you think about it, that’s incredibly smart, and equally as thrilling. These regions can offer a truly unique perspective, and one that most of the world has never had access to before, and they can share that experience with nothing more than a mobile phone—a lightweight, energy-efficent device that connects them to the world in a profound way, while equipping them with all the tools they need to interact with and be a part of that world.

Writing and publishing are now a viable means of generating income, and they require nothing more than a device that can be charged from a car battery or a windmill or a bicycle. That’s powerful.

I recently interviewed a good friend and fellow author, Michael LaRonn, after he revealed something remarkable to me. While I was traveling for conferences, I had an issue with my laptop. So, as I am prone to do, I went onto Facebook and started asking people about ways they use their mobile devices to do various tasks. One of those, of course, was writing.

I wanted to hear if there was anything new in this landscape. Maybe there were new tricks I could learn, to enhance what I was already doing on my iPad. Maybe there were apps I hadn’t heard about yet, or services I wasn’t using.

I got plenty of comments and feedback, but one of the most interesting and shocking responses came from Michael, who said, “I write all of my books on my iPhone, using the onscreen keyboard.”

I’m pretty sure there was an audible record scratch at that moment.

I immediately questioned him, asked him how he was doing it, why he was doing it, why he’d even considered doing it in the first place. And his answer was pretty simple: Writing from his phone made it possible to keep up with producing his books while he worked full time, spent time with his family, and went to law school.

I immediately fell in love with this idea. I had written on my phone before, but I’d always used a folding keyboard. I had, in fact, invested quite a bit of money in a search for the perfect folding keyboard. I wanted one that was small and compact, but could open to full size when I needed it. And it had to be easy to carry in my pocket, because I didn’t always have my shoulder bag or backpack with me. And it needed to be convenient to carry all around, because I had a bulging shelf of these things that weren’t in use, simply because they were a pain to keep with me at all times.

Was it possible that I might have had the secret to complete mobile success and nirvana with me, all this time, and hadn’t even realized it?

So I decided to try a little experiment: How much work could I get done, using only my iPhone?

Over the course of the next three weeks of traveling, I left my (now repaired) laptop in my hotel room, along with my iPad and it’s nifty keyboard case, and I carried only my phone with me. I did everything using only the onscreen keyboard. And it was an eye-opening experience.

Here’s a rundown of everything I did, while on the go:

I did all of this using nothing but the onscreen keyboard of my iPhone.

It went so smoothly, and I was able to get so much done, I decided to push it a little. While I was on a bit of a layover between conferences, I took a day trip to Disney World, and decided to ride the new Avatar simulator, “Flight of Passage.” Which, by the way, was awesome. I mean it. Ride this thing. Thank me later.

But the wait in line was two hours. And while I was excited about the chance to ride it, I’m not much for idling. I get restless and bored. I start getting annoying. I need things to do. I need to be productive. It’s just a thing with me.

So I decided it would be the perfect time to test the limits of what I could do on mobile.

I wrote a short story while waiting in line, using the mobile Scrivener app. When it was done, I used Canva to create a cover. And then I took it even further, and uploaded the story to Draft2Digital. From there, I entered all the meta data, the book description, etc, and then clicked over to Draft2Digital’s new ebook layout templates, cycling through options until I came to the one I liked best.

I was able to choose a template I loved, and see the layout in real time.

In fact, I got all the way to the point where I could have hit “publish,” and release the book into the wild. I was that close.

I stopped short of that, of course, because I want to edit the story, and make sure it’s presentable. I want to go through it and make sure I catch typos and other gaffs, clean up dialogue, make sure everything clicks. But I’ll be doing that editing on my phone as well.

The point here, of course, is that I went from conception to writing to production, stopping just shy of publication, all while waiting in line for a ride at Disney World.

If I can do that, then the world is wide open for will-be authors everywhere. There are no limits. Wherever you are, and whenever you want, you can produce and publish your books. Welcome to the new era of publishing.

Best practices for the mobile writer

As we’ve covered, there are as many ways to manage your writing as there are writers in the world. There is no set process here. There are more tool than I can possibly name in a single post (or a thousand posts), and each has its unique advantages and offerings.

The important thing will always be to find the tools, resources, and methods that work for you. That said, here are a few best practices and suggestion that might help you get to a “write anywhere” kind of workflow:

It’s a pretty fantastic age to live in. Our reach has been extended beyond anything we could ever have imagined. And for some of us, it’s going to feel a little weird to embrace this evolution. But we should. Because as writers, our duty is to allow new ideas to take root within us, to absorb them into our very DNA, and then to express them in new and incredible ways, to shape and influence our audience and the world around us—and in a growing number of cases, a world beyond our immediate sphere of influence.

Take a look at the technology you’re carrying with you, and consider: Does it have the power to change everything about your career?

I wrote this post using an iPad with a ZAGG keyboard. I edited and posted it using my iPhone, as I stood in line to get coffee at Starbucks. There’s a very good chance you’re reading it from a phone or tablet right now. Take all of that into account, and consider just how much mobile technology is empowring us as authors. It’s a bold new world, and it’s exciting to see where it’s all leading.