Time Management Tips for Authors: How to Write More in Less Time 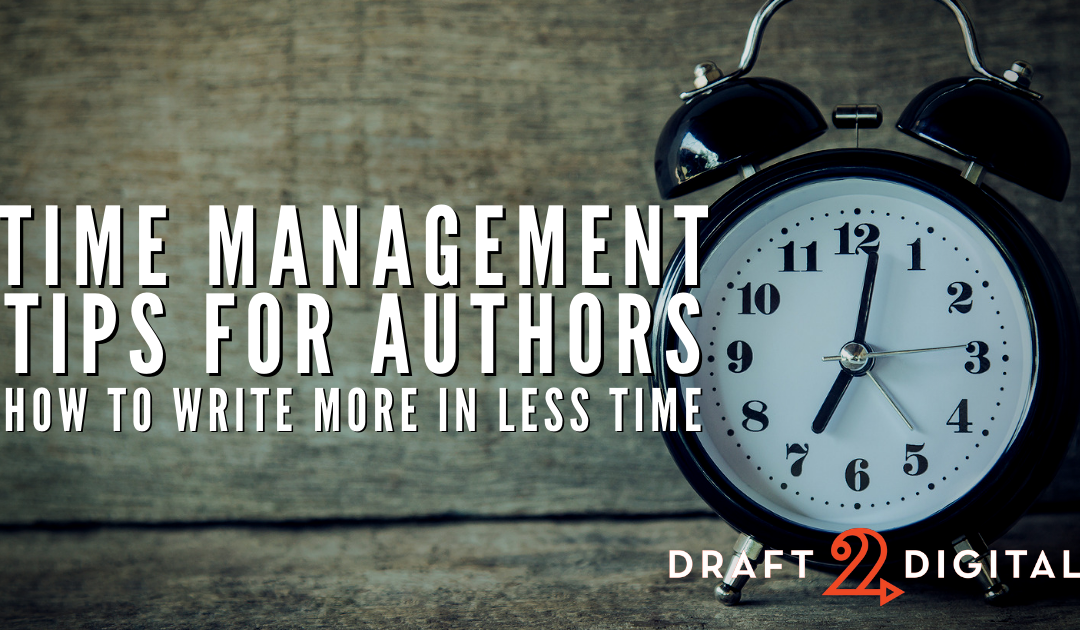 Time management might be the most relatable struggle out there. There never seems to be quite enough time in the day, does there?

For years, we tell other people (and ourselves) that we “don’t have enough time to write,” though we somehow seem to find the time to watch full seasons of Game of Thrones. (Funny how that works.)

Of course, what we really mean is that we haven’t prioritized sitting down to write every day. It hurts to say, but it’s the truth.

No matter how busy your life is, there’s probably a publishing indie author out there who’s got a similar schedule and still finds the time to write. We’ve interviewed several who are so productive that they seem to have found a wormhole in the space-time continuum.

But unless there’s something they aren’t telling us, they have the same 24-hour day to work with as everyone else. They just use their writing time in a way that makes them exponentially more efficient.

If you’re looking to make the most of your writing time, read on for a few of our favorite time management tips geared specifically toward writers.

One tip that we hear a lot is to batch your tasks, so that you’re doing the same type of activity for big pockets of time. Adjust the exact length of a “big pocket of time” to fit your schedule, but the authors we’ve spoken to seem to target anywhere between two hours and half a day.

If you have an hour in the morning to write, batching means spending that full hour doing just one thing, like working on a first draft.

This means that you aren’t checking your email, working on a draft, editing a previous chapter, and writing Facebook ad copy.

That’s because there’s a “mental cost” to context-switching. Studies show that shifting rapidly between different tasks can eat up as much as 40% of your productive time. But when you focus solely on one task, you don’t need to consistently re-orient around the new thing you’re doing in a given moment.

Writer J Thorn takes this a step further and “themes” entire days. For examples, he sets aside Mondays as podcasting days, so on those days he doesn’t write or do client work. He only podcasts. Tuesdays are his drafting days. All he does on Tuesdays is write first drafts, whether that’s for one project or several.

Tinker with the formula to make it work for you, but the key theme is to pick a length of time where you can focus on a single task.

Use a timer to enforce focus blocks

Gregg McBride told us that the secret to his productivity is staying focused for a set amount of time.

He also batches his tasks, and arranges his workspace so that nothing else gets in the way during his writing time. “Let’s say I’m going to write for two hours, but be very, very focused,” he says. “I can get a lot done.”

Critical to this approach is turning off notifications: silence your phone, shut down your email and instant messaging programs, and shut your office door (or put headphones on to let your family know you’re working. Then give 100% of your attention to a single task—like writing.

Gregg even goes a step further and disconnects his laptop from the internet entirely.

Christian Brown agrees. He told us that he takes a timer and sets it for two hours. “If you don’t have two hours, that’s fine—set it for an hour,” he says. And you just sit there and you write.”

That’s how he wrote 50,000 words—an entire novel, for those of you keeping score—in 27 days, a pace he told us he hasn’t done in ages. “That’s how you find the time,” he says. “You make the time. You create systems of organization.”

There’s no hard and fast rule for how long you must focus to be productive.

Two hours works for Gregg and Christian, but you may do better with three hours, or even 10-20 minutes. Time management is a process specific to each author. That doesn’t sound like a lot, but we know authors who have written entire novels in 10-minute pockets of time. It all adds up.

Kevin Tumlinson and Mark Lefevbre recently shared a peek into their lives as authors (as compared to their lives as D2D employees). As it turns out, both of them have developed physical cues that tell them—and their families—when it’s time to buckle down and write.

Mark uses his clothes: D2D working wear is usually a sport coat over a t-shirt, but for writing he skips the coat and surrounds himself with skulls and skeletons. (He does write horror, after all.)

Kevin used to have a “writing hat,” a baseball cap he’d only wear while writing. These days, he uses AirPods to disconnect from the outside world and focus on his work as an author.

Whether your talisman is an object or a means of optimizing your focus, it helps to implement some kind of physical shift from your “regular self” to your “writer self,” like Superman changing clothes in the telephone booth. It cues your brain that it’s time to work, and supports those focused blocks of time.

What’s your best time management tip? Leave a comment below and let us know!
Sarah is a freelance writer, full-time nomad, and husky mom. Learn more about her work (and see a picture of her dog) at www.flourishwriting.com, or find her on Facebook at https://www.facebook.com/flourishwriting/.