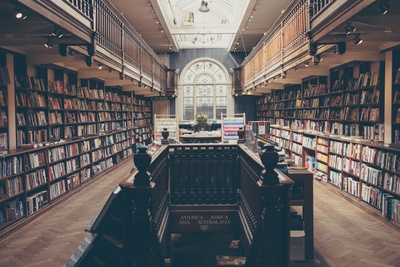 Writers write for a million different reasons, and rarely just one. For pleasure. To memorialize. To exorcise personal demons. For posterity. Because there’s a story to tell. But everyone reading this post almost certainly has one reason in common: we write to sell. And there’s nothing wrong with that! It’s called commercial art, after all. Don’t miss the fact that there are two parts to that equation, both the commercial and the art.

There are a ton of books and blogs and workshops and seminars and conferences that can help you with the art part. For the next few weeks, I’m going to talk to you about the commercial part.

Dearth of a Salesman

I used to work in outside sales in an industry that technology has now left entirely in the dustbin. But back when I sold it, this product was still a necessity to both business owners and those in need of a service.

When I started, like many entry-level salesmen, I had no sales skills at all. But I did have the ability to talk to anyone for as long as I could keep them interested. That’s half of selling right there. The other half is the tools.

I had sales tools that compared my product to the competition. I had tools with pie charts illustrating market surveys. I had testimonials from successful businesses. I showed up to a pitch with a whole binder full of these tools and more.

Those tools together gave me a framework from which I could build a sale. Without them, I was just a dazzling conversationalist.

So what are your books’ sales tools? There are a ton, obviously. Many authors get bogged down in things like distribution, price point, social media platform, and a host of other things.

But you start out with just three. They’re extremely simple; so simple that some writers overlook their true value. But all of your promotional efforts will ultimately build on the foundation created by these three things:

Now, be honest. Were you one of the ones who overlooked these? If so, don’t worry. We’re going to spend the next few posts discussing each one of these tools and how you might best put it to work.

Proper Tools for a Proper Job

Here’s a hint for those future posts: One of the tools has to set a tone, one can be clever, and one has to tell your potential reader exactly what they’re in for.

The lines between them are sometimes fuzzy because obviously they all work together and influence one another. And what’s true for fiction is completely different for nonfiction.

Nevertheless, those are the basics–Title, Cover, and Product Description–with one setting tone, one being clever, and one laying out the facts.

Which one is which and why? Come back next week and we’ll talk about your first tool, the Title.