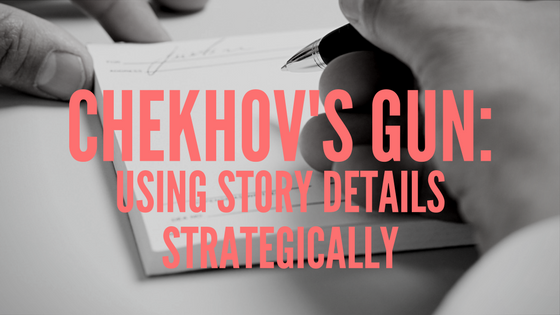 This detail may just save your life.

Or it could just be a random fact that you may or may not remember. Maybe you noted it somewhere, maybe you didn’t. Maybe you have an eidetic memory for breakfast foods. That’s a thing.

Details like this are mundane, and often seem irrelevant. That is, unless knowing that information really would save your life—or the life of your character. So the question becomes, when should you include mundane details in your story, and how do you use them effectively?

That would be Anton Chekhov, not Pavel Chekhov. For Pavel, this section would be called “Chekhov’s Phaser.”

Chekhov’s gun is a dramatic principle that essentially ties in with the story-telling principle of foreshadowing. In a number of letters to colleagues and contemporaries, Chekov posited the idea that if you introduce an object or element in your story, and assign it some level of prominence, it needs to come into play elsewhere in the story. Chekhov also insisted that if a detail doesn’t help to move the story forward, then it should go.

“Remove everything that has no relevance to the story. If you say in the first chapter that there is a rifle hanging on the wall, in the second or third chapter it absolutely must go off. If it’s not going to be fired, it shouldn’t be hanging there.”

I first encountered this quote and the principle it espouses while sitting in a high school English class, alongside some of my friends. It immediately prompted us to proclaim “shotgun!” every time we spotted a foreshadowing object, incident, or other references in a TV show or film. We got so good at spotting these, in fact, we could eventually predict the ending of about 98% of the shows and films we watched. Or at the very least, we could describe in pretty accurate detail exactly how a foreshadowed moment would play out.

Fun party games and movie spoilers aside, Chekhov’s Gun gives us a pretty good rule of thumb for when to include details in our stories, mundane or otherwise:

Ask yourself, “When will I pay this off? What is the significance of my character having eggs Benedict for breakfast? How will this move the story forward or come into play later?”

Storytelling, at its heart, is about the progression of change in your characters, for good or ill. But it’s also about guidance and discovery. Our job, as writers, is to feed a bit of line to the reader, give them a trail to follow, and entice them to move along. Including some odd, incongruous fact about your character or the day she’s having or the clothes he’s wearing can be just the right tasty tidbit to keep things moving along. But you should only use it if there’s a pay off, somewhere along the way.

At least … most of the time.

In writing, a red herring is a false lead—a bit of misinformation or an errant cue that is meant to send the reader off track, and distract from what’s really happening in the story.

In politics, this is known as politics.

Red herrings in literature play a pretty important role in building suspense and moving the story forward, but they have to be done right. In fact, they have to be done with Chekhov’s Gun hanging over your head, like a loaded Sword of Damocles—a slight reversal, where introducing a detail needs to pay off later, but in the meantime it needs to effectively send the reader on a tangent.

Using red herrings in your writing can be a great way to take the reader on a fun ride, with lots of unexpected twists and turns. But they require some finesse. Do these wrong, and you risk alienating your reader, infuriating and frustrating them because they feel “lied to.”

The balance of the red herring: We misdirect, but we never lie.

In terms of mundane information in our stories, and drawing from the breakfast example above, a red herring (for breakfast?!?) might be the fact that we listed bacon and eggs among the items on our character’s plate, as they sit at a breakfast table in a modest kitchen, with a view of the swing set in the back yard. If later in the story we reveal that the character is a die-hard vegan, the bacon and eggs are to cause some head scratching.

The red herring, however, is the scene.

For starters, we don’t explicitly state that the characters is sitting at their breakfast table, in their kitchen, looking out at the swing set in their backyard. We don’t even particularly iterate that the breakfast before them is their breakfast. In fact, we might later reveal an even more chilling detail: Our point of view character has no children. So who is that swingset for, anyway?

If we don’t reveal our character’s veganism or childlessness until well into the story, then the reader starts with one impression of the character only to have it derailed (favorably and in a good way) later. That’s a fun kind of upset expectation, and one that makes your story feel all the more real and intriguing. It adds layers of depth, creating strata for your story that the reader can excavate as they go.

Once we start getting details that contradict what we think we know about this character, we really want to know what the character was up to, and why they were sitting so calmly in front of someone else’s breakfast. And, maybe even more intriguing … where was the person who belonged to that breakfast in the first place?

Maybe one of the most-given and yet most-misunderstood bits of writerly wisdom ever is “show, don’t tell.” In short, the idea is: Demonstrate the nature of your character by what he or she does, rather than describing their motives and intentions.

Joe has recently become a nail biter who suffers from TMJ, and he regularly snaps at his co-workers.

Linda makes a sour face any time a person of color enters her café.

We don’t know the specifics behind any of the above, but we know something’s up. We have hints. And they may be hint enough for us to figure a few things out. We may intuitively learn something about the characters, their financial situations, their personality quirks, the fact that there’s something stressful happening in their lives, all from what the writer shows us.

For certain, the writer could tell us directly that Joe has recently gotten some bad news about his stock portfolio. Or that Linda was brutalized by a person of color, and struggles with a subconscious racism. Or that Joshua is paying off a mountain of legal bills after being sued for custody of his daughter, while Cindy is the pro-bono attorney who represents him.

Those are the facts, and there may well be a place for them in your story. But not including the specifics, and instead hinting at them with action in the scene, gives the reader a chance to fill in the gaps on their own. This makes them more engaged with the story, and makes the story more engrossing and fun to read.

By including a few mundane details—nail biting, a facial expression, a few packets of condiments—we can guide the story in whatever direction we want. But only if we use those details strategically.

So the answer to “when should I include a detail?” really comes down to “will that detail help move the story forward?”

There’s a rule in film making: If it doesn’t move the story along, it’s out.

The same should be true in all of your writing and storytelling. The details—even the mundane ones—can be vital to your scene and your story, but only if you are using them as part of a strategy. Including mundane details can be an effective tool for both engaging your reader and setting the tone and voice of your story, if you think them through and use them smartly.

In your current work, or your next work, consider a scene in terms of the details you’re giving.

How does each detail impact the energy and motion of that scene?

For example, if you have a scene in a restaurant, you might consider a description of the table clothes: Does the color of the tablecloth add anything to the story? It could set the mood (“the table linens were intimidating in their crisp, clean whiteness, perfectly draped at each table”), or it could foreshadow a future event or a detail to be revealed (“the red of the tablecloths seemed to him to be too dark, too deep, too much like large pools—or seen from further back, like a splatter of dots across the restaurant’s floor”).

The most mundane detail can become sinister or angelic, depending on its presentation and on the intention of the author.

Take a look at the details you’re including in your scenes, and weigh them against your intention for that scene. If they help, if they set up something for later or otherwise assist in the movement or setting or tone of the story, leave them in. If not, then it’s time for a cut. Details are, always, the ammunition in Chekhov’s Gun. Take careful aim, and your readers will fall in love with your work.