The Best Tools for Writing On the Go 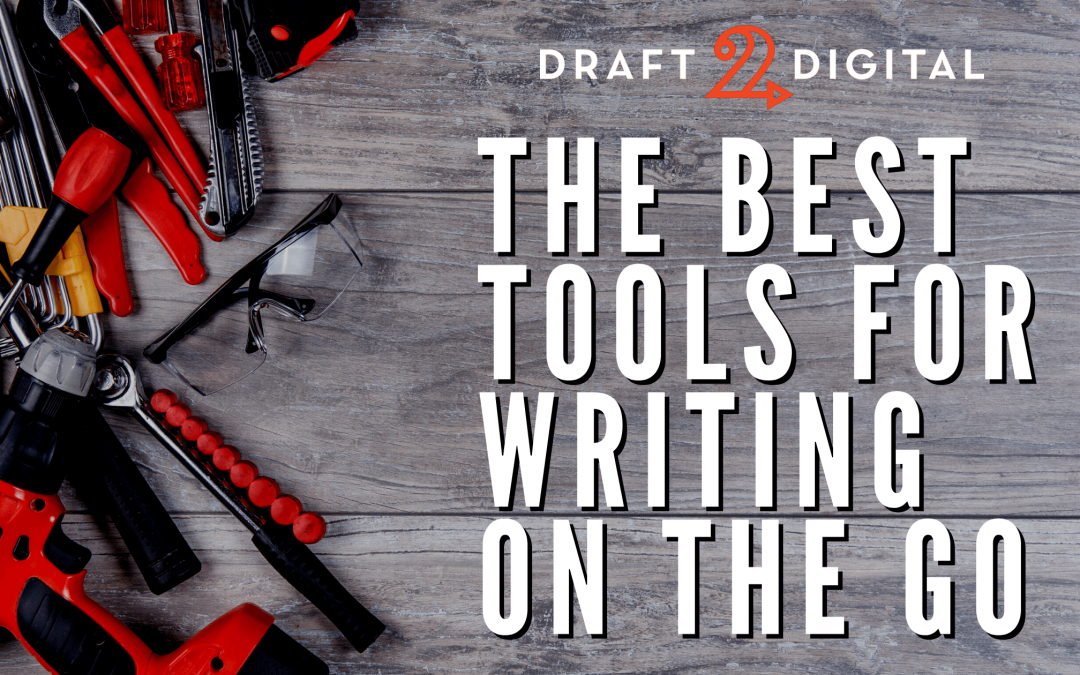 We know there are a fair few writing purists out there, so we’ll lead with a disclaimer. Writers have completed their work by hand for thousands of years—with chisels and stone tablets, quills and parchment, or pens and Moleskine notebooks. (We don’t get kickbacks from Moleskine, by the way. We just love their notebooks.)

While writing by hand is an ultra-portable approach beloved by writers the world over, requiring no battery power or expensive electronics, we figure you’re probably familiar with the concept already. Besides, there are times when your hand just moves too slowly, or your fingers want to quit before your brain does.

For authors looking to leverage the power of technology to help you write on the go—faster, longer, and finger cramp-free—this post is for you.

This is the hardware and software we find ourselves reaching for most when we want (or need) to get the words in while we’re out walking, on an airplane, in line at the grocery store, commuting to work, or other places where our laptops and writing desks aren’t readily available,

iPads, e-readers, and even smartphones with large screens are almost as good as laptops for writing these days. Cloud-based writing software and apps make it possible to sync up seamlessly with work you’ve started on a laptop, or pick up your mobile writing session when you’re back at your desk.

Here are a few extras we’ve found critical to the experience of writing on a tablet.

These are usually Bluetooth-enabled, so you don’t need to carry another cord with you. They’re super lightweight and sometimes even fold or roll up for ultimate portability. Sturdier versions often also function as a stand for your tablet or smartphone. We love these keyboards because they save us from typing with our thumbs—or trying to use a QWERTY keyboard on a screen without accidentally tapping stuff we don’t mean to. Logitech makes some great ones, but you can find lots of different versions.

Mobile apps for Word processing software started out pretty bare-bones in comparison to their desktop counterparts in terms of functionality, but now they’re a near match. If you’ve already got a project started in a Word processor at home, mobile versions allow you to log in from another device and pick up right where you left off—so long as files are saved to the Cloud.

Our top three favorites are:

Some apps that aren’t specifically Word processors, like Evernote or Apple Notes, work great for writing on the go. You can write in these apps directly, or use them to collect research, notes, photos, and other odds and ends that go along with your book.

Both Evernote and Apple Notes offer hierarchical folder structure, file sharing for collaboration, the ability to add PDFs and photos, and tagging to help you keep track of your work.

And, because they’re cloud-based, you don’t need to worry about saving anything locally and being unable to access it from anywhere.

If you just can’t quit writing by hand, but don’t want the bulk of a paper notebook, Paperlike and similar products provide the feel of paper without the need for a notebook. Write as much as you need to on your tablet, without sacrificing the feeling of paper under your hand. (All the lefties we know love the absence of smeared ink, too.)

Got writer’s block? Dictation software could just be the answer. After all, it’s much easier to get going when that blank page isn’t staring you in the face. And if you’re like me and go professional-grade with your procrastination, dictation eliminates a lot of excuses. Do you suddenly feel the need to clean your house when faced with a writing deadline? Great! You can do that and dictate while you clean. Or go for a hike. Or commute to/from work.

Dictation works wonders for lots of authors because it often feels easier to talk out an idea than to commit it to writing. Talking feels like less pressure; after all, you’re just talking through an idea, you aren’t officially putting words on the page. By the time you go back through your dictation to edit, you’ll already have the hard part—the first draft—out of the way.

Dictation devices and software have gotten pretty good, and they’re only getting better. Here are our favorite devices—and software—to transform your spoken words into text.

That covers our favorite writing tools while we’re on the go. What are yours? If we missed something, let us know in the comments!