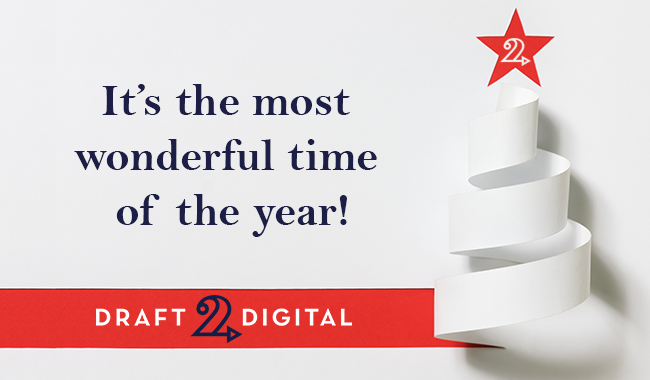 But if you’re publishing new books or making changes, there could be delays.
For best results, submit your requests no later than December 11th, to make sure they’ll be live by Christmas.

Christmas and the New Year are creeping up on us and we wanted to give you an early warning that these holidays will affect publishing times.

Our offices will also be closed on Monday, January 1 in observance of the New Year.

We expect that the flurry of pre-Christmas releases and the special holiday hours at our partner stores will result in some delays. If possible, plan ahead and submit any changes or listing requests by December 11th to ensure the changes get published before the break.

We have received additional details directly from several of our partners:

Apple’s publishing systems will be experiencing additional delays from mid-December through early January. To help you in planning release dates around this period you may use the following schedule:

All submissions must be submitted prior to midnight (PST) on the dates above.

Book submissions and metadata changes supplied to Barnes & Noble from Draft2Digital are processed the next business day.

No files will process during those windows, and there will be no direct support. Also during this time you may experience review slowdowns, and slowdowns following those dates as B&N deals with backlog.

Kobo will have only limited support from December 18th thru January 8th. They ask that you only upload important an dnon-deferrable imports during that time. Kobo’s publishing system will be down entirely from December 22nd through December 27th, and from December 29th until January 2nd. During this time we will not be able to submit any new books or changes. We recommend getting everything to them by December 11th.

Scribd have announced limited support over the break (which greatly restricts how much our Customer Support can assist you with problems at their stores). Scribd support will be closed from December 25th through January 1st.

We anticipate that Amazon will be closed on December 25 and January 1. To ensure against potential delays in file review and other processing, we recommend submitting your books prior to December 11th.

Due to the volume of submissions during the holiday season, we expect other vendors will take longer than usual to implement changes and to publish new works. However, there are no confirmed or planned publishing delays.

Preorders scheduled during these periods will go live as expected, provided we get the final manuscripts in and approved before the cutoff date of December 11th. We highly recommend getting us the final earlier that week to make sure it gets through review.